For the love of asparagus

We went to the best place with the least memorable name I've been to in ages the other day! I've had to go and find the leaflet just to tell you it's called 'Buschmann Winkelmann Spargelhof Klaistow'. You might know it as the 'Spargel place with with the giant bouncy pillow'. Or  'Hüpfkissen', if you want to order one. And if you try it, you will want to order one. Look! They even have a baby one!
Anyway, I am getting ahead of myself. Hamish came here on his Kita trip the other week. Cynical old me thought the reason they had brought the kids here was so the staff could all stock up on asparagus at fantastic prices. But in fact it's just generally great. From the moment you get there you get that warm, happy feeling that comes with there being NO ENTRY FEE. That's awfully nice of them. Especially as there are tons to do.

For starters you can, as most people probably do, buy a mountain of asparagus. White stuff, jumbo stuff, green stuff, all at a great price. Your pee won't thank you, but it is the best asparagus we have tasted.

There is simply loads for the kids to do. From little Bobby cars, to the hay bales laid out in a maze formation. Below you'll see Orla lying on top of it in the split second when she wasn't running around and jumping about on it like a crazy person. (They also have a corn maze later in the summer which they missed a trick by calling it the 'Maislabyrinth' when quite obviously it should have been called the 'Maismaze'). Honestly I have nothing bad to say about this place. Which isn't like me. I like to be a little sarcastic and negative for humour purposes, ad it's just not happening. I even liked those what-do-you-call-them's below for NOT having crap written on them like 'be my love bunny' - because like them, I like my love notes to be factual. Serious. To the point. And to many, asparagus is love. 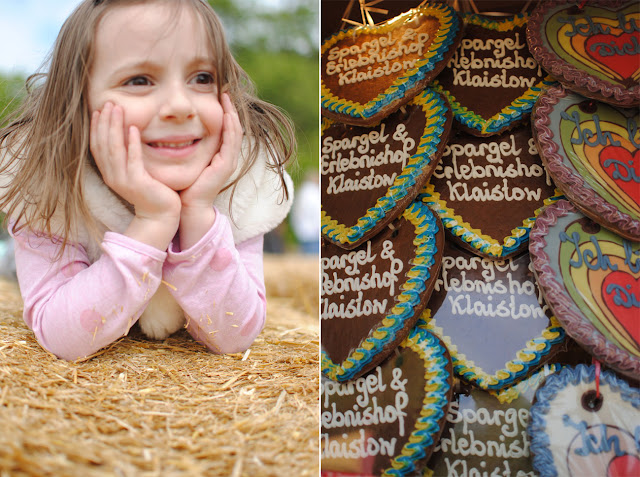 The people of the Buschmann Winkelmann Spargelhof Klaistow have a love of asparagus so deep and intense it's like one of those relationships that's gone a bit crazy. Because there is no other reason to assume that normal people will want to eat asparagus ice cream. Even if you place it in the middle of the selection between the strawberry and the hazelnut. (And if you do fancy trying it, then I am just going to assume that you are the same person who buys that bright blue Smurf ice cream. "A kugel of asparagus, and a kugel of Smurf on top please" - AND, if you are thinking "mmm...that sounds nice", please stop by the chemists for a pregnancy test: there may be some good news waiting for you).

The madness continues in the store where there are a thousand un-bought bottles of asparagus liquer. I do love the bottles, and the labelling is nice, but the thought of it alone is making my stomach spasm. Having said that, I would buy it though. Why? Think about it: It is the perfect thing to stock your drinks cabinet up with as your kids hit the age of around 14, 15. You know, when they sneakily start going to friends parties and make up a Coke bottle of mixed alcohol from their parent's booze cupboard. Think you can get the better of me? Ha! You'll never want to drink again after you savour your first Spargel/Cinzano cocktail! 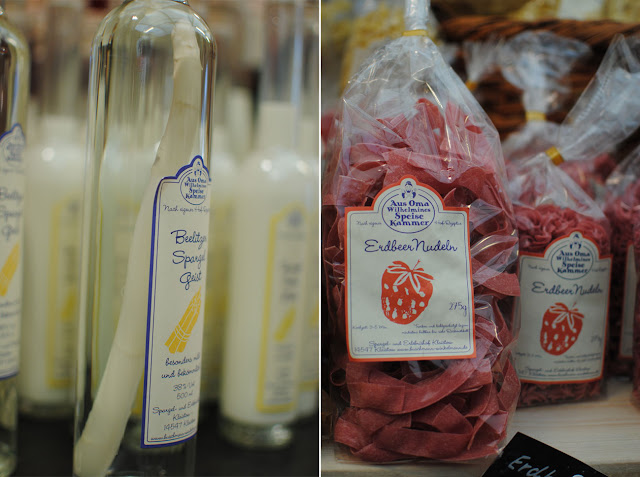 As you can see, they also got a bit carried away with the pasta as well, and decided to *improve* it by making it strawberry. Has anyone tried this? I am wondering whether you could dessertify this and do something marvellous with custard or bread and butter pudding and fresh berries. Otherwise I can only imagine it with salad, and if I even let my mind wander to the prospect of it with a Dolmio sauce, I start coming over all queasy again.

So I am way off topic. I was going to tell you about there being animals, and a climbing forest (Do you do that? See a word like 'Kletterwald', think "that makes sense", and then not know what you should call it in English?). They have flea markets, restaurants, bands playing, playgrounds, fairground rides for teeny tiny kids, a giant wooden boat, quad bikes, horse rides, animal feeding sessions, a forest to walk through, various festivals, oh, and in September they'll be making giant dinosaurs out of pumpkins. As you do. 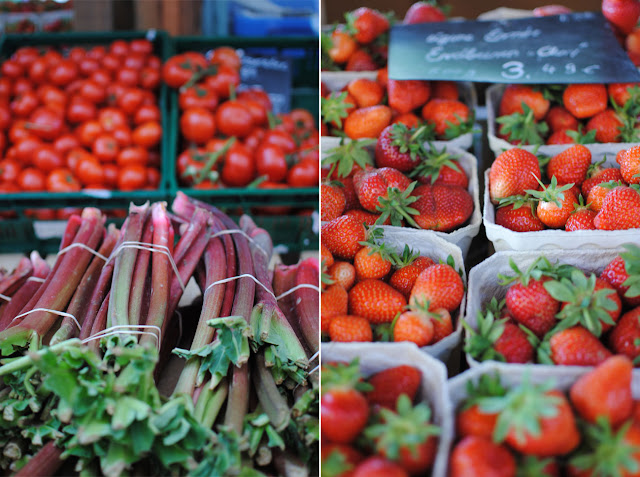 So, all I can really say is this place is great. You'd love it. It's free for Christ's sake! What's not to love? And if you find yourself low on brushes and creepy things made out of fur that you'd like to stroke as you sit by the fire rocking back and forth in your rocking chair eating your Smurf ice cream, then let me tell you, this place is gonna ROCK YOUR WORLD! 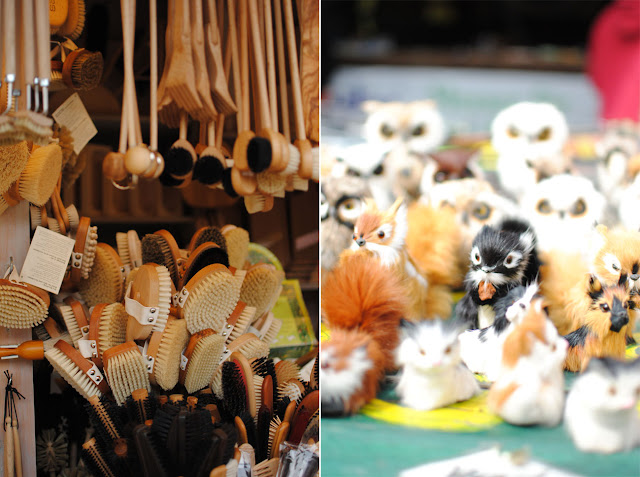 Link for the pumpkin exhibition: just look at the photos. There should be a caption competition for that one with the men with the camel. http://www.buschmann-winkelmann.de/beelitzer-spargel-und-mehr/kuerbisse/kuerbisausstellung/
Posted by fiona at 21:55

Email ThisBlogThis!Share to TwitterShare to FacebookShare to Pinterest
Labels: asparagus, Buschmann Winkelmann Spargelhof Klaistow, do something different, flea market, food, more fun than you can throw a stick at., spargel, the kids, things that make you feel sick

You're not going to leave without saying something, are you?

fiona
2 and a half years of a Berlin adventure; I am Fiona: Scottish expat, mother of two, girlfriend of a man seemingly raised by wolves. I chronicle our discoveries, disasters, and eh...other things starting with 'd' when I can think of any. Now that I'm not out and about butchering German grammar, I am trying to revive my career as an illustrator/surface designer back in England. And in my spare time I'm planning our escape...